A cryptographic manuscript book by John Wallis (1616-1703) shows text mark-up at work in the early modern period. The symbols Wallis identified in this code include pairs of symbols that ‘signify that what is between is to be deleted’, and one symbol to delete that which is before it. The work by Wallis, who had decrypted letters during the Civil Wars, was a book of deciphered letters, intended to teach the skill to another generation. 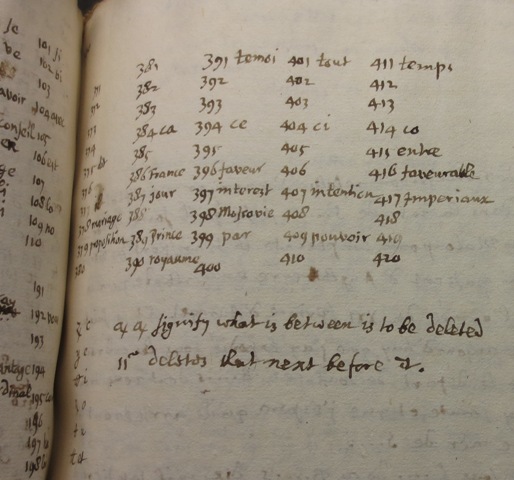 Louisiane Ferlier’s master class on October 14 examined books donated by Wallis to the Bodleian and other Oxford libraries. Cryptographer, mathematician, founding member of the Royal Society and controversialist, he was the Savilian Professor of Geometry from 1649 until his death, and was elected Keeper of the University Archives in 1657.
His donations to the Savilian Library (kept privately within the Bodleian) and to the Bodleian itself were the subject of Dr Ferlier’s discussion, as she examined the means and possible motives of his presentation of printed books, pamphlets and manuscript books. Manuscript publication of books of letters intercepted in cipher, which Wallis had deciphered during the Civil Wars, he presented in order, he wrote, to teach others how to decrypt codes. Other materials seemed particularly aimed to strengthen the Bodleian’s holdings of material intended to show the truth of Protestant religion.
see: Cultures of Knowledge calendar and edition of Wallis’s correspondence and The Wallis Project, an investigation of his works on grammar, on logic and on music theory.