In 1919, the Bodleian Quarterly Record printed the following notice on the death of Charles Henry Olive Daniel, Provost of Worcester College, Oxford:
‘We regret most deeply the loss of Dr. Daniel, as a good friend of the Library. For many years (though not lately) he occupied his leisure with printing as a fine art, and the beautiful productions of the Daniel Press are well known to all lovers of books. Mrs. Daniel recently offered to present to the Library the hand-press and type used by him, and the offer was very gratefully accepted. Through the kindness of the Controller, the press has now been set up by experts from the Clarendon Press, at the farther end of the Picture Gallery, with the chase, containing the last pages set up, still in place. A small collection of some of the more interesting books printed on it has been arranged on an adjacent table. Though we have plenty of books to show, this is the first time we have been able to exhibit to visitors the means whereby they are produced.’

The author of a recent book on Daniel and his printing, Martyn Ould, offers this assessment of his printing origins and experience:

‘Charles Daniel learned to print in the family home in Frome, Somerset, where his father Henry was perpetual curate of Holy Trinity. All the family were involved in printing a vast number of ephemeral items: bookplates, printed items for the church, tickets for tea parties, tiny books, programmes for plays, . . . – items that his bibliographer Falconer Madan referred to as ‘minima’. [He added, “Unfortunately there seems to be no dignified and yet suitable term for these waifs and strays, here termed minor pieces. They are what remains when the majestic car of the professional cataloguer has passed by and left them strewn on the wayside. The occupant of the car calls them succinctly and comprehensively trash.”]

‘They printed on a ‘Ruthven’, a parlour press ideal for a Victorian family, but a press that could manage only small items (many of which are pasted into three volumes in the Bodleian: MSS Don. d.94 and d.95 and MS Don. e.227). Nevertheless when Charles left Frome to go up to Oxford the press went with him and it was on that press that he printed one of his rarest items, The Garland of Rachel, in just thirty-six copies. Difficulties with the printing of The Garland led him to replace the Ruthven with the Albion; this had a much larger platen which would have made it very much easier to manage the larger books and pamphlets that were to come from the Daniel Press in Oxford.

‘Daniel was not a great technical printer, but his books have great charm. He printed on hand-made papers, setting his texts – mostly poetry – from founts of some of the famous seventeenth-century ‘Fell types’ which he persuaded Press Controller Horace Hart at the University Press to sell him. He first used Fell type in A New Sermon of the Newest Fashion (1876), the second book he printed at Oxford. He also used a black letter, of which the first example entirely in black letter is The Growth of Love (1890) by his friend Robert Bridges.’

This large Albion was the printing press which was given to the Bodleian. As reported by Philip Gaskell in the Journal of the Printing Historical Society no. 1, 1965, it is an ‘Albion (demy), serial number 539, (1835)’. The maker’s names, Jonathan and Jeremiah Barrett, executors of R.W. Cope, are cast into the staple. Cope was the originator of the Albion press in the 1820s. This cast-iron, lever-operated press was praised by commentators of the time as being simple in construction and durable.

Bodley’s Librarian in 1919, Falconer Madan, had visions beyond a static display of the press. ‘[I]t is in contemplation to print on it a Bibliography of the Daniel Press, with a Memoir of its “only begetter”, and some poems by friends. This will be the first book ever printed within the walls of the Bodleian.’ The catalogue record of this work is in the University of Oxford’s online catalogue, SOLO.

Martyn Ould writes:
‘As well as his books – over fifty in total – we’re fortunate in that two collections of proofs survive from his waste bin. Like early versions of a poet’s final polished verse, they tell us something of his printing practice. They are generally on sheets of newsprint – a suitably cheaper alternative to the expensive hand-made paper of the final book. 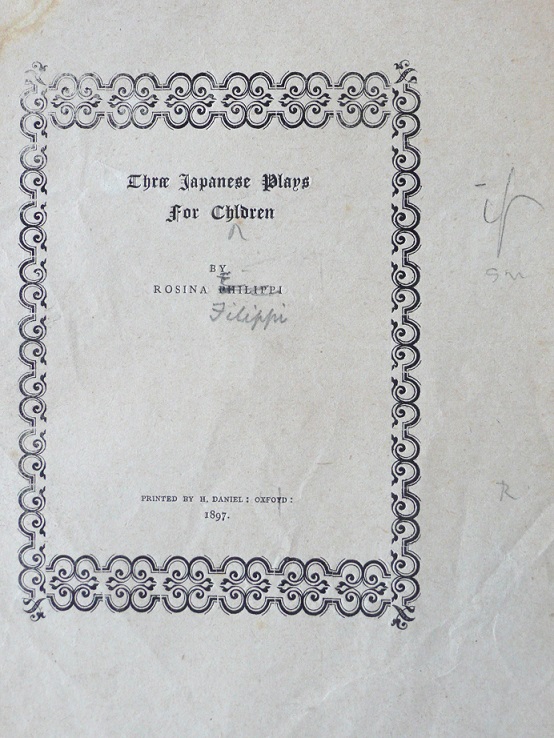 ‘In the proof of a title page shown here he has marked several ‘typos’. The Y for an R in ‘Oxford’ is easily explained: the boxes for those two letters are next to each other in the typecase and no doubt the Y was returned to the wrong box when some other text was distributed. The missing i in ‘Children’ is less easily forgiven.

‘In three further proofs Daniel corrected some errors and toyed with the text; all was well in the published book. The proofs tell us that Daniel did not have a firm habit of reading a completed line in the composing stick before moving on to the next: what must be a first of several proofs of a forme for Three Japanese Plays for Children shows a great many errors, some of which made it through to the final book. Nonetheless, his books are today highly collectable.’

In 1949, library staff and members of the English Faculty established the Bibliography Room in the New Bodleian Library. Practical printing became a regular offering for postgraduate students, just at the time when mechanical processes of type-setting were replacing the hand-composition of type. The enthusiasts from library and faculty supported teaching and demonstration of practical printing, joined by J.R.R. Tolkien and others.

The Bodleian workshop now holds several other hand-operated printing presses, Albions and other makes, acquired from private presses and individuals. Some of the latest acquisitions were an Albion press owned by Leonard Baskin, whose archive came to the Bodleian in 2009, a proofing press owned and used by Vivian Ridler, Printer to the University, and a rolling press for printing intaglio.