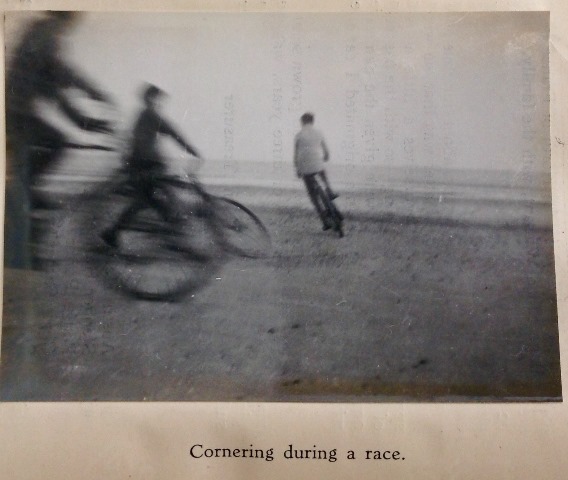 “A little townlet on the coast under the lee of the Sussex Downs – this was Littlehampton. With its old-fashioned Harbour, its irregular network of streets, its quiet, conservative atmosphere, it represented to us at the time a miniature Paradise. Long stretches of sandy beach, sandhills and the surrounding Downs, all added to the charm of the place in which we lived and about which I have attempted to write.”

So begins ‘The Troops’, the Bodleian’s latest acquisition, hooked from the book trade. The book is a private production of June 1935. No other copy has yet been identified, though I suspect it was distributed to the seventeen or so childhood friends whose blissful existence it celebrates between 1923 and 1929. Crudely but lovingly produced, with no pagination or publisher’s imprint (unless one counts the embossed address, Warwick House, Littlehampton), it includes pasted in photographs of ‘the troops’ and provides a charming and moving narrative of their journey through childhood, from the ages of about ten to the late teens. 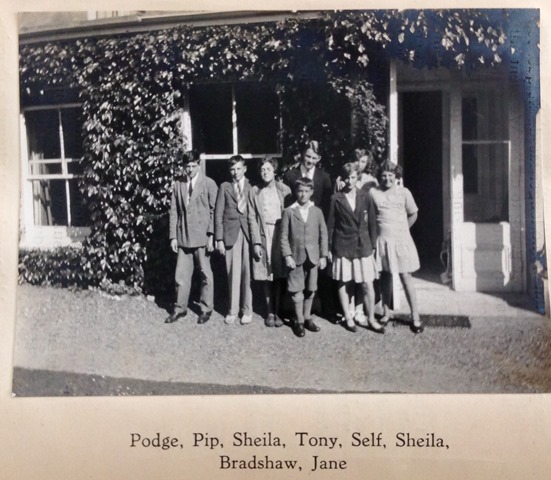 The author, looking back in his early twenties, traces out the activities of the expanding ‘gang’ during Prep school holidays. They start as kids playing with mud pies, eating ‘sticky sweets’ and puzzling out Meccano before establishing a cycling club, organising races on the beaches and through the town: ‘bicycles and nothing but bicycles, with a concentration of which only children are capable.’ Then it’s hockey, followed by theatrical performances and even a cine film before grownups, interspersed with tennis, swimming, picnics and meetings in a club house, all enabled through the kindness and financial support of one parent in particular, ‘Mrs Mitchell (Treasurer and general big-noise).’ The personality of various members emerges sweetly. ‘Evan Hayes and Podge Porter were the mad men’, Austin Harmer is the sensible time-keeper, Jeffrey Quill turns out to be a natural actor and ‘Jane always insisted on being barmaid – this sounds awfully naughty but it was only Orange crush and cider.’ The poignancy of such innocent fun is sharpened when we realise that real troops  – those of the marines – would later use the beach at Littlehampton to train for D Day landings.

An elegiac note develops towards the end: ‘we were growing up without realising it – awful business that growing up – the big cry was £s. d., and at that age the demand was greater than the supply.’ The author, I think one Tom Murphy, ‘started clerking it in London’ at the end of 1929 after a final dinner together. ‘I suppose’, he reflects with melancholy wisdom, ‘thousands of others have spent, and will spend, their youth in a similar way – similar but not quite the same – nobody could be happier than I was during that time.’ The group had agreed, earlier that year, to meet again on the 1 January 1939 with the proviso that ‘anybody bringing along a husband or wife should pay a fine towards the champagne.’ Our author notes, ‘at the time of writing that dinner is still four years away, and it looks as though there is going to be plenty of champagne.’ 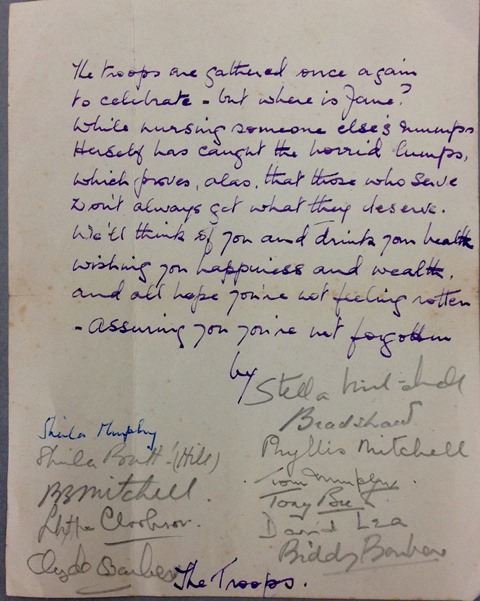 That reunion seems to have happened. A sheet of paper enclosed with the book features a poem dedicated to Jane and signed by various members. The book is also inscribed to her and must have been her copy:

The Troops are gathered once again
To celebrate – but where is Jane?
While nursing someone else’s mumps
Herself has caught the horrid lumps,
Which proves, alas, that those who serve
Don’t always get what they deserve.
We’ll think of you and drink your health
Wishing you happiness and wealth,
And all hope you’re not feeling rotten
Assuring you you’re not forgotten.

Who were these troops who shared such lucky times together? One or two I think I have identified. Podge Porter, may have become head of French at Magdalen College School Oxford (and a friend to the author John Fowles and Marxist to boot). Jeffrey Quiller turned out one of our most celebrated test pilots of Spitfires – all that speed on the beach! But of the others, what trace? I list the names I have identified below. We’d love to know more.

1 thought on “Who were ‘The Troops’? An illustrated childhood Idyll”