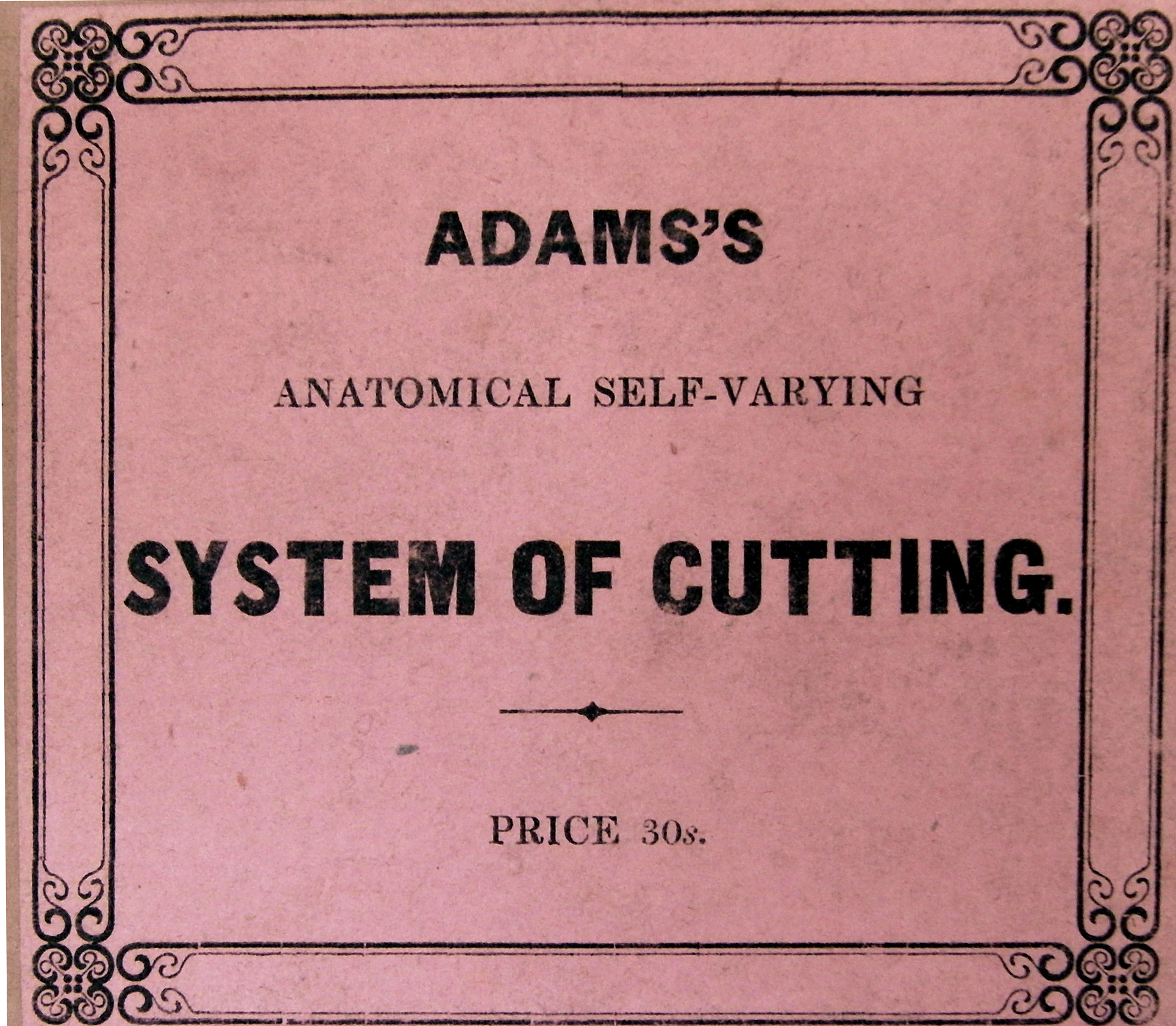 During the decant of the New Library in 2010 we unearthed a number of Victorian and Edwardian patterns for cutting, sewing, crocheting and knitting clothes. One of the most interesting finds was James Adams’ “Anatomical self-varying system of cutting coats, waistcoats, trowsers, breches and habits” (Cirencester, 1843) with instructions and plates for manufacturing better fitting clothes. The majority of the work, however, deals with the plight of the poor working in Britain’s clothing industry, the insidious sales practices of the sellers and the destructiveness of the entire system. He was clearly a social reformer in the same mould as Robert Owen and a supporter of the movement to reduce the long hours of textile workers. He touches upon the eight hour working day, unfair pricing practices, appalling working conditions, terrible pay and the lack of skill and imagination in what he pejoratively calls the “outfitters and slopsellers” of London’s West End.

“The articles exposed for sale are got up in a showy manner, to attract the eye but when minutely examined, the notion of cheapness will immediately dissolve. For the purposes of entrapping the unwary passer by, they exhibit a large placard, on which they offer a best superfine coat at a low price of two pounds … Now the cloth used in making such coat is of the very commonest kind … which is always pressed as highly a possible, in order to give it a smooth glossy appearance which by the unacquainted with the trade is mistaken for fineness … the price paid for making is perhaps not more than five shillings … leaving a profit of seventeen shillings to the vendor. After the coat has once been exposed to a storm it becomes as spotted as a leopard, and the wool, which was once apparently beautifully smooth, stands up from the texture of the cloth so much that if again shorn would go some way towards the manufacture of cloth for another such article.

Thus, are the public defrauded, and the industrious man robbed, by this victimizing system. It behoves all who wish others to live as well as themselves, to unite in the suppressions of such infamous trickery. More especially should every one strive to break up a system which produces such abject misery among toiling artisans, as is vividly pourtrayed by their sallow and emaciated appearance – produced by working such a number of hours for such trifling recompence …  Thousands of our fellow creatures are confined in dens, from five to six feet square, and toiling for ninepence or a shilling per day – infants are pining at the breasts of mothers, and fathers distracted for want of food – all produced by this ticketing contrivance.”

“Who will uphold such a diabolical state of things as this? Is there no tongue that will endeavour to make itself heard in the cause of suffering humanity, and try to convince the public, of the injurious tendency of such a system?” (p. 13-14).

Pattern books are one of the categories of material which were poorly treated among the masses of material arriving in the Library in the nineteenth century. After the renewal of the copyright agreement in 1824 the Bodleian began to take in books on an unprecedented scale and to cope with processing the many items considered to be without much scholarly interest (at the time), many were assigned shelfmarks but not added to the main printed books catalogue. Entries were made in the handlists in the usual way which allowed them to be found, after a fashion, but no wholesale retrospective recataloguing of items that had slipped through the net was done until the closure of the main Bodleian stack in 2011, when brief information was finally added to the online catalogue, SOLO.