One thing I thought might be fun to do on occasion on this blog is to showcase some individual documents from our various resources that tie in with events and days in history.  Yesterday was the 69th anniversary of the Japanese attack on Pearl Harbor, and today is the anniversary of the USA’s declaration of war on Japan and entry into World War II (mutual declarations of war with Germany and Italy followed a few days later).  I’ve had a look through some of our e-resources to see what I could find relating to the Pearl Harbor attack, as follows:

Newspapers and contemporary reports
We have electronic access to the archives of both the New York Times and the Washington Post. You can search them individually or both at once, if you select them both on the first screen you come to after clicking through from OxLIP+.   Searching both for December 8, 1941 brings up a large number of articles and editorials, and you can also get to images of the front pages of both papers from that day. 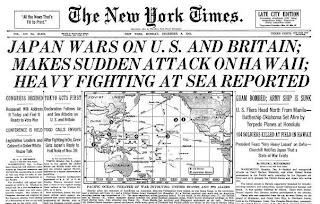 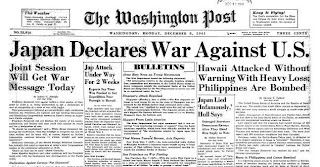 The official response
The US Congressional Serial Set is our major e-resource for US government publications. I’ll write in more detail about it in forthcoming blog posts, but it contains all the reports and documents submitted to Congress from 1817-1994.  A search for ‘Pearl Harbor’ and ‘1941’ brings up both the House and Senate Documents from the Joint Session where President Roosevelt addressed Congress and requested that they declare war: 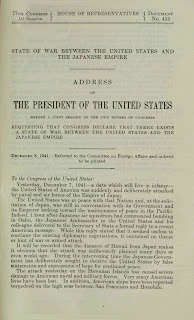 The President’s address can also be found in the Congressional Record, along with the resolution to declare war and the record of the proceedings in the Joint Session. We don’t have the Congressional Record as an electronic resource, but the print volumes are all held in the library – the volume that includes the proceedings on December 8th is v.87, pt.24.  The Senate record also includes various newspaper editorials in response to the attack that were entered into the record at the request of Senator Bridges.  This is the kind of material that is sometimes additionally found in the Congressional Record that you might not otherwise expect or be able to get hold of here in Oxford, as we don’t have holdings of many US newspapers for the 20th century.

Another Pearl Harbor-related document that you can find in the Serial Set is the report of the commission appointed by the President to investigate the attack, which was submitted to the Senate in January 1942. 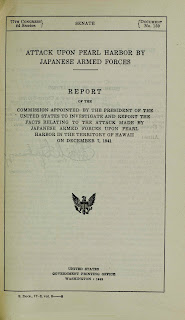 For more links to freely available web resources, take a look at the VHL’s delicious page.

(Cross-posted to the VHL blog)

If you’re going to be away from Oxford over the Christmas vacation, you can still access library electronic resources even when not connected to the University network.   There are two ways to do this.  One is to sign up for a remote access account with OUCS and install VPN (Virtual Private Network) software on your computer, but if that seems fiddly (or you’ve already left Oxford and not sorted that out), library resources are still accessible to you without it.   All you need to do is sign in on SOLO or OxLIP+ using your University single sign-on account, and then click through to the resource you’re looking for – it will know who you are and grant you access as a University member. Now you can enjoy uninterrupted research, no matter where you are!