The VHL has just acquired access to the online archives of two new newspapers, The New York Amsterdam News, 1922-1993 and The Pittsburgh Courier, 1911-2002. Along with the access that we already had to the archive of the Chicago Defender, 1910-1975, Oxford is now the only institution in Western Europe with access to three major black newspapers.  We were able to purchase these two major new resources thanks to a generous donation received by the History Faculty, and it brings our total number of US newspaper e-resources up to five (along with The New York Times and Washington Post).  However, if you’re looking for US newspapers, this is by no means all we have!   Prompted by our new acquisitions, this blog post will provide a summary of some of the US newspaper sources available in Oxford and how to use them.   A second blog post soon will cover newspapers freely available online and elsewhere in the UK.  News magazines and other periodicals will also largely be left to a subsequent post.

The above five newspaper archives are all provided by ProQuest and available via OxLIP+.  As they are all available from the same provider, they are cross-searchable with one another, as well as with other ProQuest historical databases (such as the American Periodicals Series or some British and Irish newspapers which Oxford also has access to).   When you click through from any of the titles on OxLIP+, you will be taken to the same ProQuest screen listing available databases.  The historical databases are listed at the bottom of the page so you may need to scroll down. You can then either select several to search, or click on an individual title to just look at that one archive.

Both the basic and the advanced search screen make it easy for you to restrict your searches by date (before, after, or between), and have a ‘more search options’ tab at the bottom which allows you to search specifically by author or document type (advert, editorial, article, etc).  Once you have found an article that interests you, you can view, download, email and print PDFs of the article itself or the page that the article is on.  You can also get citation information and direct links to the article so that you can come back to it later.   Another useful function is the ‘page map’ display, which not only shows you the full page, but allows you to click on other articles within the image to view them, putting the article in context within the newspaper as a whole.

The ProQuest platform also offers a range of options for saving records.  You can mark documents both from the article view and from the results list, and they are then available by clicking on the ‘My research’ tab at the top of the search screen.  From here, there are a variety of options for exporting your list of records – as a printed or emailed bibliography, as citations into reference manager software, or as HTML files.  The email option also allows you to send yourself the articles themselves as PDFs (though you might not want to do this for too many at once!).

19th Century U.S. Newspapers provides access to approximately 1.7 million pages of primary source newspaper content from the 19th century, featuring full-text content and images from numerous newspapers from a range of urban and rural regions throughout the U.S. The collection encompasses the entire 19th century, with an emphasis on such topics as the American Civil War, African-American culture and history, Western migration and Antebellum-era life among other subjects.

The search interface offers both basic and advanced keyword searching, with options to restrict by location or newspaper title as well as by date and type of article.  In addition there is a newspaper search screen, which allows you to search for specific publications, again with the option to limit by location (state or city).  It is not possible to browse the newspaper titles available but you can download a list of all the newspapers included as a Word document.  Once you have found a newspaper that you are interested in, it is then possible to browse the available issues.

Much like the ProQuest interface described above, you can download PDFs of pages or individual articles, and the same page map facility is also offered here, allowing you to click through to the individual articles from the full page.

Newspapers available on microfilm in the VHL

In addition to the newspaper archives we have access to electronically, the VHL also has a substantial collection of American newspapers on microfilm.   Most of the newspapers we have are either part of the Early American Newspapers collection, or the Black Journals collection, but we also have runs of both the New York Times (the printed index to which is also available in the reference section) and Washington Post from 1851/1877 respectively up to the end of 2005.  For the Washington Post, the electronic version stops in 1994, so the microfilms are the only way to access the years after that.

The titles that make up the Early American Newspapers collection cover the years 1690-1876 (largely 1760-1860), and include titles from all thirteen original states, plus Indiana, Kentucky, Maine, Ohio, Tennessee, Vermont, West Virginia and the District of Columbia.  The VHL holds 79 titles from this collection on microfilm, as well as a guide to the entire collection (in the reference section at Micr. PN 4855 .E18 1987) which contains descriptions of each newspaper.

The Black Journals collection contains 17 titles from the first half of the 20th century, providing a historical record of black Americans and their culture. Titles include The Crisis, Colored American Magazine, Harlem Quarterly, Race Relations and the Tuskegee Messenger.

A list of all the newspapers that we hold on microfilm can be found in the microfilm subject guide in the library, and also viewed online.

This bilingual database (English and Spanish) covers US ethnic and minority newspapers and other periodicals. Coverage begins in 1990, although you can find full-text access to some articles dating further back, and abstracts for more.  A full list of titles included in the database can be found by clicking on the ‘Publications’ tab at the top of the search screen, and there are also RSS feeds available for current titles if you want to keep up to date.   Ethnic NewsWatch is provided by ProQuest, like the Historical Newspapers, so the search interface should look familiar if you have used those before.  However as it is not a historical database it cannot be cross-searched with those newspapers and must be searched separately.

Nexis UK (online via OxLIP+)
Nexis UK is a vast database that provides access to thousands of news sources from all over the world. Its coverage is largely current and recent, but does go back 20 years in some cases.  If you want to restrict your search to US newspapers you can do so by selecting ‘US news’ in the ‘sources’ box towards the bottom of the search screen.  This will then provide you with a list of available titles to restrict your search further by specific publications if you would like to do so. 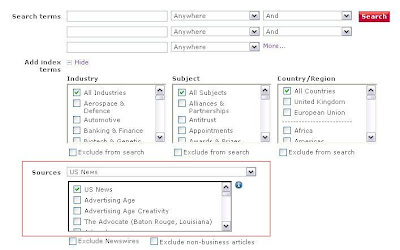