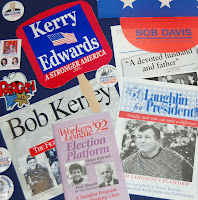 The Vere Harmsworth Library is home to the Philip & Rosamund Davies US Elections Campaigns Archive, an extensive collection of campaign ephemera from American elections at all levels. The archive has been donated to the library by Professor Philip Davies, Director of the Eccles Centre for American Studies at the British Library, and is the result of many years of active collecting. The majority of the material dates from the later 20th century, but there are examples of older items dating back as far as 1840. The archive continues to grow as Professor Davies collects and donates material from each new round of elections in the United States.

The archive has now been fully catalogued and can be made available to researchers in Oxford. While items such as those contained in the archive were intended to be ephemeral at the point of production, they can tell researchers a great deal about the campaigns and candidates they were produced to support (or indeed protest). They are physical evidence of the issues on which campaigns were fought, and the perceived strengths and weaknesses of the candidates who fought them. Not just the literature, but the slogans and design of buttons, posters and bumper stickers, as well as the very items branded for campaigns indicate the way candidates chose to present themselves and their opponents. As well as providing insight into the campaigns themselves, the literature and artefacts contained within the collection also demonstrate wider developments in society, politics and technology.

What does the archive contain? 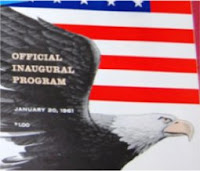 To learn more about the archive and what it can tell students and researchers of American history and politics, watch the below video of Professor Davies discussing the material culture of US elections and political marketing, accompanied by selected items from the collection.

There have also been a couple of short videos on the topic posted recently on the BBC website in the run up to this year’s elections: Badge man predicts Ohio winner, talking to a manufacturer of campaign buttons, and Preserving US presidential campaigns on the web, which visits the Smithsonian’s extensive collections as well as looking at the archive of campaign TV advertising from the Museum of the Moving Image.

Full details of the materials can be found in the archive catalogue, and images of some of the items (either individually or as part of previous exhibitions) can be seen on our Flickr page. If you are interested in consulting items from the archive, please contact jane.rawson@bodleian.ox.ac.uk.

This post was written by DPhil candidate Patrick Sandman, and first appeared on the RAI Events blog. It is reposted here with permission for the interest of VHL readers.

In a well-attended and interesting workshop, Nancy Smith, the Director of the Presidential Materials Division at the U.S. National Archives, discussed the history and accessibility of presidential papers to a group of undergraduates, graduates, and professional historians.

Beginning the discussion with FDR in 1939, Director Smith detailed the trajectory of presidential libraries and materials. Fifteen years after Roosevelt donated selected material to a library in Hyde Park, NY, Congress passed the Presidential Library Act in 1955. For the next two decades, presidents donated and distributed papers at their own discretion.  For Director Smith and millions of Americans, however, the tradition of presidential papers would change in July 1973.

During his testimony to Sam Ervin’s Senate Committee, White House Assistant Alexander Butterfield revealed the existence of President Nixon’s infamous White House taping system.  As a result of the calamity, contention, and cynicism surrounding Watergate, Congress created the Presidential Records Act in 1978 to broaden public accessibility to the office of the President.

During the last forty years, Director Smith has worked closely with Presidents and their records.  She highlighted the difficulty of cataloging executive information, particularly the often-contentious process of delineating the personal and private from the public and presidential. As such, she often deals with presidential staff and lawyers in order to properly archive non-classified information.

Interestingly, the advent of electronic records has added a new, complex dimension to presidential material. For George W. Bush’s administration alone, Ms. Smith and her staff will screen more than twenty million emails.  Despite the tremendous challenge of vast email compilation, the PMD, under the guidance of Director Smith, makes presidential material available faster than any other place in the world.

Before ending the discussion, Director Smith provided excellent advice to an audience of historians. She disseminated packets of information on various Presidential libraries around the United States and encouraged researchers to explore new collections and archives.

You can also follow the Presidential Libraries on Twitter and Tumblr – the Tumblr in particular is fascinating.

And for even more, if you’ll excuse the blatant plug, I visited two of the libraries myself last year as part of my Travelling Librarian trip – you might be interested therefore in my write-ups of my visits to the FDR Library and the JFK Library.

And finally, Nancy Smith also spoke later in the day about the role of the National Archives in presidential transitions. This talk has been written up on the RAI blog by both Skye Montgomery and Sebastian Page.