The software underlying SOLO will be upgraded this weekend. SOLO will therefore be unavailable from 8am on Saturday 3rd until 9am on Monday 5th August.

OxLIP+ will be unaffected, so if you wish to access electronic resources or e-journals, please use OxLIP+. If you want to search for books in Oxford libraries, try using Mobile Oxford or COPAC.

This week we are pleased to welcome students on the UNIQ History: Race & Protest summer school. UNIQ Summer Schools are week-long, subject-specific courses designed to encourage talented school students from less privileged backgrounds to apply to university, and the History programme has taken place at the Rothermere American Institute in the past.

As part of their course, students on the History: Race & Protest summer school will be spending some time each afternoon studying in the VHL, and the mezzanine area will be reserved for them during the afternoons this week.

We are delighted to announce the launch of our brand new website! The design of the site has been overhauled in line with other Bodleian Libraries sites, and we took the opportunity to also review and revise the site’s content and structure. We hope that the new site will therefore not only look nicer, but will be more friendly to use and provide far more information about the library than the old one did. 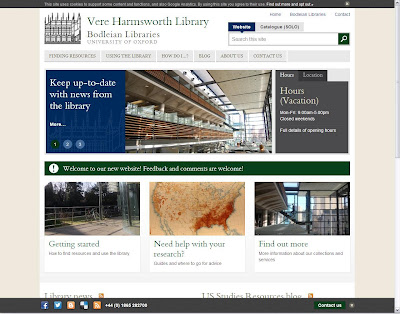 We will continue to work on the site now that it has been launched, and welcome feedback, comments and suggestions. If there is information missing that you would like to see on there, or if you think things are in less-than-logical places, please do let us know. As the site design is part of the Bodleian-wide project, we have no control over the look and feel of the site, but we can make changes to content and structure. Please take a look and let us know what you think!

We now have trial access to two major databases of African American Periodicals and Newspapers until 9th August.

Both are now available via OxLIP+ (sign in for remote access). Please send comments and feedback to jane.rawson@bodleian.ox.ac.uk