To mark the 50th anniversary of the assassination of President John F. Kennedy, we have set out an exhibition drawing on our collections, including materials donated by two Distinguished Fellows of the Rothermere American Institute, to commemorate his life and death. 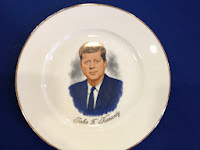 The exhibition may be seen in the three cases by the enquiry desk on the ground floor of the library. The first case contains materials relating to Kennedy from the Philip & Rosamund Davies US Elections Campaigns Archive – these include a 1958 ballot paper from Massachusetts, buttons and other ephemera from his campaign for President in 1960, and a copy of the official program for his Inauguration in January 1961. Accompanying these materials is a display of copies of clippings of news articles written by Godfrey Hodgson about President Kennnedy from his time as Washington Correspondent for The Observer which began in 1962. These news clippings have been donated to the RAI by Mr Hodgson as part of his collection of papers from his long career as a journalist and researcher on the United States. 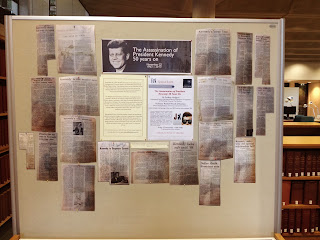 The second and third cases cover the events of November 22, 1963 and their aftermath, drawing on the library’s extensive holdings of official publications such as the Public Papers of the Presidents, Congressional Record, and the Report of the Warren Commission, as well as further articles from Godfrey Hodgson’s collection.

The exhibition will remain on display in the library for the next few weeks.