Happy Christmas! Here’s a present: news of two new eresource acquisitions, both funded by a very generous donation from the Association of American Rhodes Scholars.

Chronicling a century and a half of the African American experience, African American Newspapers, Series 1, features 280 newspapers from 35 states, including many rare and historically significant 19th-century titles. These titles published for or by African Americans constitute valuable primary sources for researchers exploring such diverse disciplines as cultural, literary and social history; ethnic studies and more. Beginning with Freedom’s Journal (NY)—the first African American newspaper published in the United States—the titles in this groundbreaking series include The Colored Citizen (KS), Arkansas State Press, Rights of All (NY), Wisconsin Afro-American, New York Age, L’Union (LA), Northern Star and Freeman’s Advocate (NY), Richmond Planet, Cleveland Gazette, The Appeal (MN) and hundreds of others from every region of the U.S.

Access to over 130 digitised newspapers published by and for ethnic groups in the United States, particularly those of Czech, French, German, Hungarian, Irish, Italian, Japanese, Jewish, Lithuanian, Polish, Slovak and Welsh descent.

Spanning the Early Republic’s Open Door Era to the Era of Liberalization in the mid-1960s, Ethnic American Newspapers from the Balch Collection covers two centuries of immigrant life in the United States. Nineteenth-century topics include the denial of citizenship to “nonwhites”; the founding of nativist political movements, including the anti-immigrant “Know-Nothing” party; the 1849 discovery of gold in California, which lured people from all over the world; New York City’s place as the world’s largest Irish city in 1860 with more than 200,000 Irish-born citizens; and the Immigration Act of 1882, which levied a tax on all immigrants landing at U.S. ports.

In addition to the major contributions of immigrants to business, music, science, education, labor movements and war efforts, later topics include the Naturalization Act of 1906, which for citizenship required immigrants to learn to speak English; the 1921 Emergency Quota Act, which favored northern and western Europeans; the 1942 internment in “War Relocation Camps” of Japanese Americans, several of whom published newspapers; Truman’s 1953 Commission on Immigration and Naturalization, which revealed the positive impact of immigrants; and much more.

Both collections are now available via SOLO/Databases A-Z. 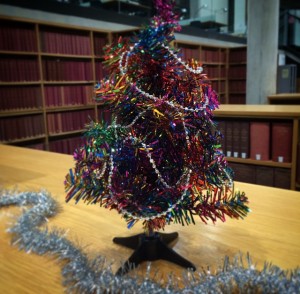 The library will close for Christmas at 5pm on Friday 21st December and reopen at 9am on Wednesday 2nd January.

For those readers with borrowing privileges, any books checked out or renewed from Thursday 20th December will be due back on 2nd January.

We’d like to wish all our readers a very happy Christmas! See you in 2019!

Need to brush up on your IT and information skills for research? Why not come to a Research Skills Toolkit? These free 2-hour workshops introduce key software and online tools for your research, hone your searching and information skills and introduce you to subject specialists. Our next series will be running in 1st week of Hilary Term 2019. Topics on offer include: