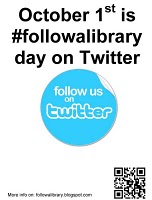 October 1st 2010 is Follow a Library Day on Twitter. The idea behind this project is to get Twitter users to tweet about their favourite libraries on 1st October, using the hashtag #followalibrary, in order to create a buzz and highlight the importance of libraries to people around the world.   The Follow a Library project is also creating lists of libraries on Twitter, and the various Oxford libraries that tweet (including us) are being added to the UK list.   If you use Twitter, join in on Friday, and don’t forget to follow the VHL @vhllib!