I am pleased to report that Oxford researchers now have access to the online 17th and 18th Century Nichols Newspapers Collection via SOLO or Databases A-Z.

A collection of late 16th and early 17th century newspapers, pamphlets and broadsheets, the Nichols newspaper collection is held at the Bodleian Library and was bought by the library from the Nichols family in 1865. It comprises 296 volumes of bound material. In partnership with the Bodleian Library, Gale scanned the original physical copies to produce this online resource.

The two biggest collections of 17th- and 18th-century newspapers were owned by Dr. Charles Burney and his fellow collector, John Nichols. The Nichols Newspaper Collection contains titles that are not in the Burney Collection and fill gaps from title runs in Burney. Having access, therefore, to both the 17th-18th Century Burney Collection Newspapers and the 17th and 18th Century Nichols Newspapers Collection is wonderful news for early modernists studying British history, politics, society, culture and also international relations in this period.

Using Gale Primary Sources you can search across both Burney and Nichols newspaper collections simultaneously.

The resource, covering the period 1672 to 1737, includes approximately 300 primary titles of newspapers and periodicals and 300 pamphlets and broadsheets.

Examples of some interesting newspapers include Athenian Mercury (1691-1697), The Flying Post (1695-1733), The Post Boy (1695-1728) and many more. It also includes all four issues of The Ladies Mercury, an early example of a periodical aimed at women, and The Female Tatler, the first known periodical with a female editor. 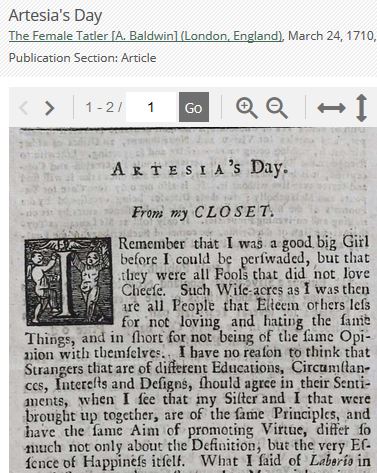 How to use and search the Nichols Newspapers Collection

Advanced searches include limiting to type of content, year, etc. As ever when searching full-text in early modern newspaper resources, the use of language has to be carefully considered. The resource does allow you to search for variations in spelling. Reading the Help > Search section is highly recommended. Proximity searching doesn’t seem to be available, to the best my knowledge. Researchers can browse by publication title or date.

The resource comes with introductory essays and resources:

Finally, it also includes a tool which analyses the frequency or popularly of terms in the digitised documents (Term Frequency). While the visualisation of term frequency is exciting and linking relevant documents is incredibly useful, any post-1737 results should be ignored as, of course, there are no Nichols newspapers after that year:

John Nichols was a writer, printer, former Master of the Stationers’ Company and biographer of Hogarth (Biographical anecdotes of William Hogarth, 1781) and local history enthusiast (The history and antiquities of the county of Leicester, 4 vols., 1795-1815) . An enthusiastic collector and antiquarian, he began collecting newspapers from c 1778, when in June that year he purchased a share in the Gentleman’s Magazine, becoming sole printer from 1780.

Learn more about him and his family: